Weedmaps in the news 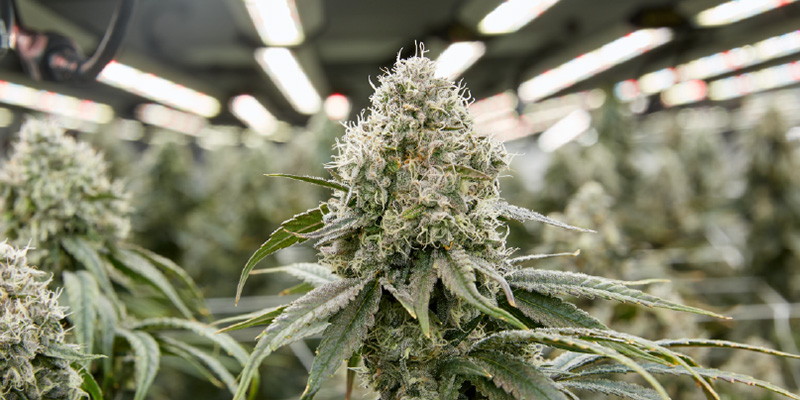 Weedmaps is cultivating the future of cannabis technology in Irvine 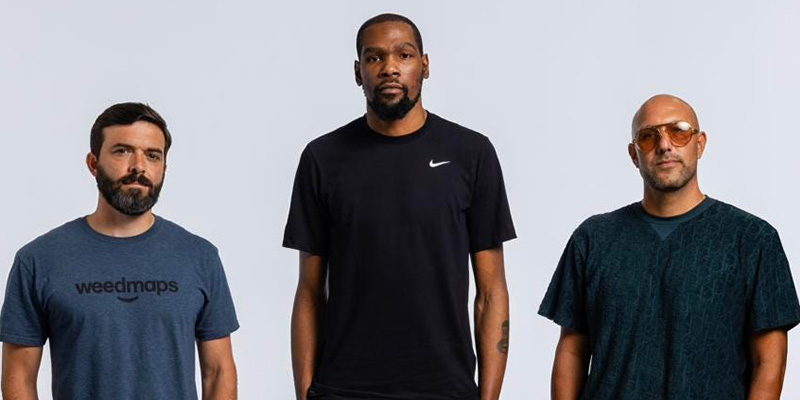 Kevin Durant, Rich Kleiman on cannabis, partnership with Weedmaps: 'The band-aid's been ripped off' 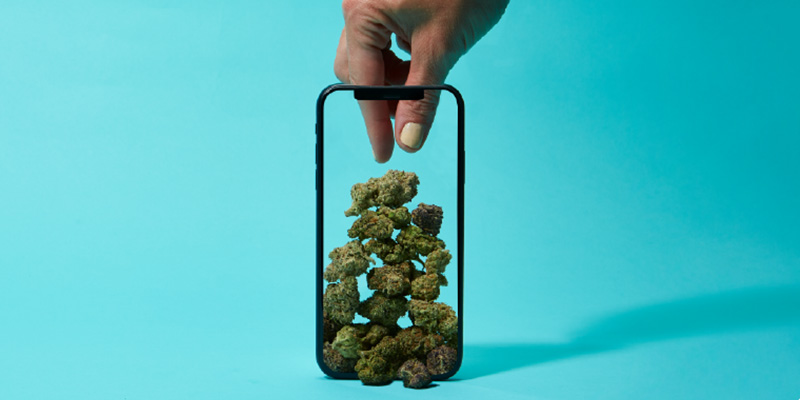 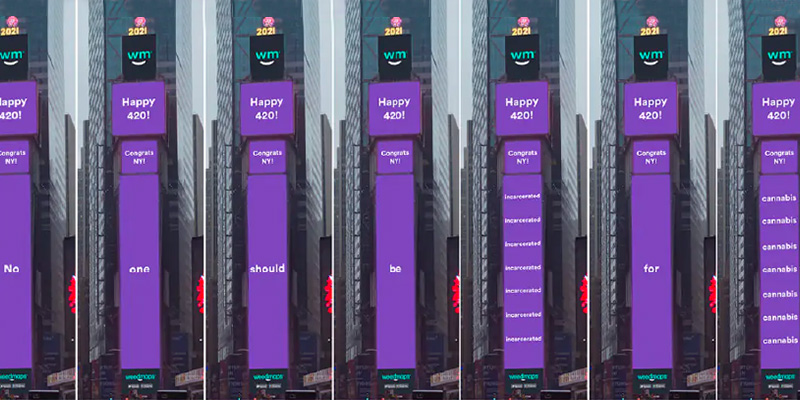 For 4/20, Weedmaps Towered Over Times Square With a Message Against Incarceration 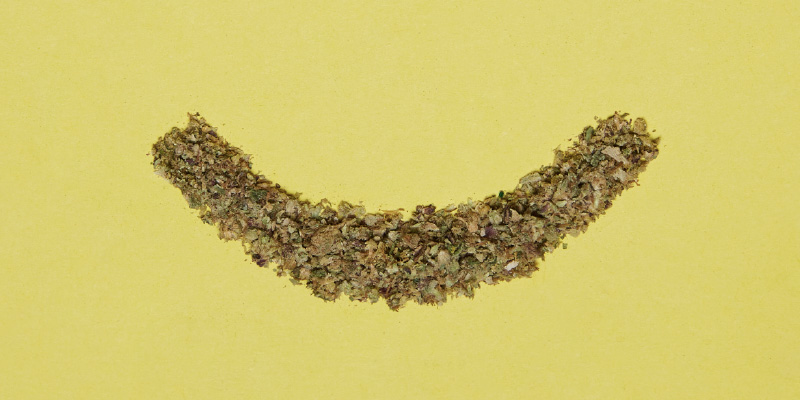 In heavyweight move for cannabis, Weedmaps sponsors Mike Tyson's return to the ring

The event, presented by Triller, puts the cannabis brand on a global stage as pro sports warm to the category. Read more >

If you’re a member of the press and would like to cover Weedmaps or have questions, please get in touch: press@weedmaps.com

Since 2008, we’ve been helping the cannabis community smile. We encourage you to learn how to properly use the Weedmaps logo for each expression you create.

Give me the goods

Kevin Durant, Rich Kleiman on cannabis, partnership with Weedmaps:
‘The band-aid’s been ripped off’

Having invested in a couple cannabis ventures in the past, the team is now going after a new challenge: a collaborative content partnership with tech platform Weedmaps, focused on combating misconceptions around cannabis and its use in the sports world, as well as advocating for legalization.

The deal also includes a sponsorship agreement with Durant’s sports media network, Boardroom, a dedicated section on the Weedmaps site, and ongoing integrations with the outlet and its Out of Office podcast. The companies will initially collaborate on the production of an original content series, tentatively slated for debut in 2022.

According to Durant, the discussion about their next move in the cannabis space had been going on with Rich Kleiman, his partner at Thirty Five Ventures, for months.

During an Out of Office podcast episode Forbes got access to ahead of its release, Durant mentioned how things have “come full circle,” as he expressed excitement about “actually trying to tell stories around it [cannabis] and seeing how we can parallel the sports world.” 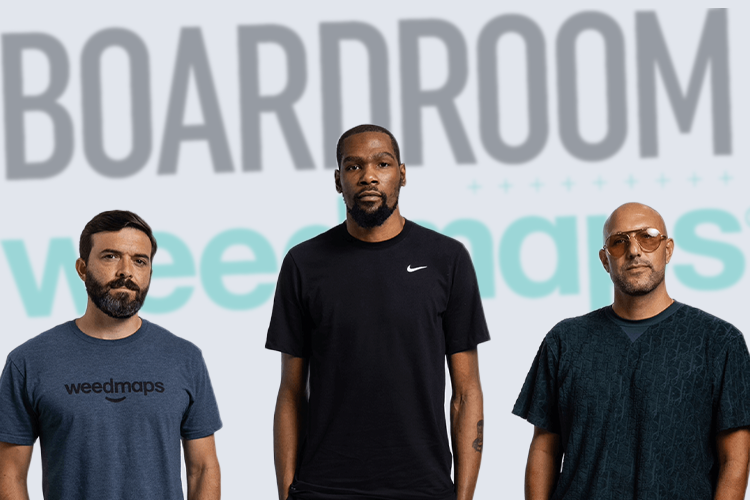 “It’s been incredible just to work through the deal. Now, to have it signed, sealed, it’s exciting,” Durant added.

“I think it’s kind of limitless what we can cover and what we can talk about. We as a company, Kevin, myself, our platform, Boardroom, all of us realized that it was important to get into this conversation,” Kleiman said during an exclusive interview before the podcast recording, as he discussed the partnership with Weedmaps.

Up to this point, Durant, Kleiman, and the Thirty Five Ventures and Boardroom teams had only invested in the space and covered it from an editorial standpoint.

“Elon Musk smokes a joint and people lose their marbles. But there is a TV show called ‘Drunk History’ where a bunch of people get blackout drunk and try and reenact historical things; and that’s on primetime television.”

But the power duo wanted more. They wanted to be at the forefront of legalization advocacy and the fight for the normalization of cannabis in general. “It’s such a prevalent conversation topic in sports. It’s got such a beneficial use for people when it’s used the right way. And I think the education and the storytelling around all of this is important because the conversation needs to be talked about in a way that people can really understand and educate them.”

Fortunately, in Durant’s view, the social stigma around cannabis is gradually disappearing. “The Band-Aid’s been ripped off,” he assured.

“In the sports world, it was kind of an undercover thing, that players used cannabis, and used it while they were actively playing. And I always thought that was an interesting thing, even as I started to come into the league. Now you hear the conversation more and more around the league about it [cannabis].”

While Kleiman obviously hopes to uncover new investment opportunities in the cannabis space, the deal with Weedmaps is about a lot more than that.

“There are times where we’ve invested and gotten very strategic, but this is the biggest deal we’ve done in a lot of ways. Not Kevin individually, but, as a company.
As a sports network, we’re really partnering at the hip. As we build this platform out and we cover sports in general and the business around sports in general, we’re making a real commitment to really speaking about this [cannabis] and making this a real topic of conversation across our platform.

“And then for Kevin, as a iconic elite athlete, to be the co-founder of both Thirty Five and Boardroom and stand in front of this and know what that means is also very big in a lot of ways.”

The deal was very well thought out, he explained. “We may be like the Google, the 800 pound gorilla for the cannabis sector, but obviously the cannabis sector is still, I think, fighting its way into the mainstream. So, in terms of the broader narrative and zeitgeist of the time we may not be a household name. But we do a lot of things that people don’t realize. We have to be the largest policy team in the cannabis space; we’ve been very instrumental in a lot of jurisdictions open for legalization; we’ve been very active on the shape of legalization, things like social equity programs being implemented, that sort of thing. And so we have a rich back catalog of insights and stories and information.

For Beals, this will allow Weedmaps and Boardroom to look at cannabis through a wider lens than usual.

“I think Kevin and Richard really saw is that there’s the broader conversation, the conversation of why is cannabis stigmatized when its are safer than alcohol or whatever else. But then the broader conversation of cannabis and sports medicine, sports and its relationship with the prescription pharmaceutical industry… There’s just a broader narrative or theme. It’s somehow it almost feels like people are failing to see the forest for the trees, or at least I feel that way. And I think that’s what’s great about this.”

This means that the partnership will not only focus on advocacy and “bummer” stories. There will also be fun components to it, things to make the conversation around cannabis more digestible for the audience.

“I think that’ll help the conversation quite a bit, to be able to bring in people that are not scared to have the conversation, talk about all of the things that we discussed, but also create great content, great storytelling,” Kleiman said. “It’s just part of the backdrop of it a bit.”

“I think when you see what happened at the Olympics with Sha’Carri Richardson, and you know that even though everyone rallied around her ultimately and she had different commercials that came out showcasing her, that wasn’t what she wanted to do: She wanted to run in the Olympics,” Kleiman explained when asked about what Durant and himself thought about cannabis, personally.

“The fact that when it was all said and done, when the conversation’s over, she missed the Olympics: That’s going to keep happening. So I think for Kevin, knowing that this becomes such an important tool for so many athletes, knowing that it has real benefits on players’ anxiety and the stress and their physical health, and knowing that across all sports, it’s something that has to be spoken about, makes this important… If the Sha’Carri Richardson thing wasn’t a wake up call for other people within sports to kind of take a look at this harder and not let that happen again, then we have to make sure that it could.”

Rich also has a very personal relationship with weed.

The impresario is not a big drinker. He’s got two young kids and works a lot. “When I found this healthy relationship with cannabis, where I can utilize it in lieu of everybody else’s glass of wine when they come home, or in lieu of needing to have whiskey and get myself drunk to fall asleep, I really realized that the way I could check out, create, brainstorm, really have my own time and my own thoughts, was doing it [consuming cannabis].”

However, this partnership is not about his personal preferences, he repeated. It really had to do with realizing how important cannabis will be in the sports world and the wellbeing sphere in general. “I felt like in some ways Kevin and I kind of had to do this and do this with Chris because it’s going to take a lot of individuals to drive the conversation and the stigma a little bit for it’s been ripped off, but there’s still so far to go with it.”

Where does stigma come from?

That’s Chris Beals’ concluding, rhetorical question. And a tough one to answer.

“Stigma is either because there is a harm to something or because you’ve been taught to fear something. And I think in cannabis, it’s 100% because we’ve been taught to fear it, because scientifically there is no harm to cannabis or at least the commonly associated harms. We need to rethink this, and that’s what this partnership is about,” he ended.